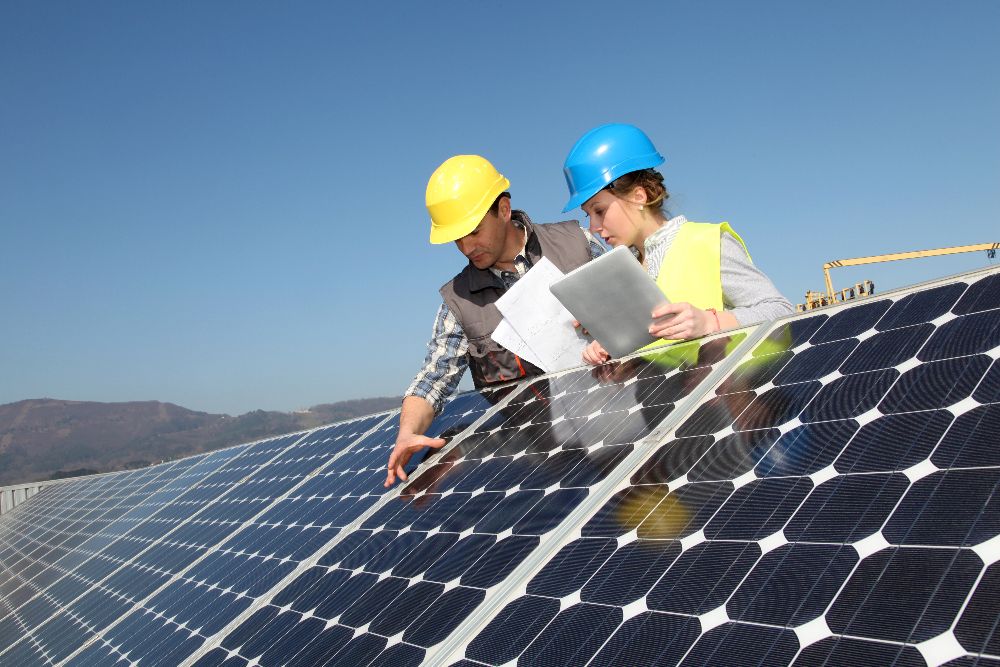 The Welsh Government must introduce renewable energy apprenticeships if Wales is to play its part in meeting the UK’s ambitious target of 600,000 green homes a year by 2028, according to one of Wales’s leading renewable system installers.

David Jones, Managing Director of award-winning Vale of Clwyd-based Hafod Renewables, says a lack of apprenticeship-style courses is handicapping companies trying to scale up their services.

“The Welsh and UK Governments want us to phase out old-fashioned fossil fuel heating systems but heating engineering courses still teach people how to install gas and oil boilers.

“What they don’t do is equip a new generation of heating engineers with the skills to put in solar or air and ground-source systems which is where the future of heating and power is.

“There has been a huge boom in the number of people wanting to invest in renewable energy systems for their homes and there is also a boom in housebuilding but the homes of the future will be very different from those of the past.

“I would like to take on apprentices to help train them on renewable systems but the colleges still insist on teaching them to put in gas and oil systems which are no good to me at all.

“They are going to be phased out in the future and the real growth will be in retro-fitting renewable systems to older properties but we will have a real skill shortage in the renewable industry.

“There simply won’t be enough people coming through with the skills to install renewable systems for the Government’s targets to be met.”

Award-winning Hafod Renewables, three times Wales’s Renewable Energy Installer of the Year, employs 14 staff and is a key player in the region in the installation of renewable energy systems.

Their turnover has soared by £1 million in the past 12 months to £2.8 million-worth of new green energy systems in homes across North Wales and Cheshire with the biggest increase in demand coming for air-source systems.

They work like refrigerators in reverse, using a heat exchanger to transform the outside temperature of the air to up to 25 C indoors with water heated to 65C and can work even when that outdoor air temperature plunges to -25C.

They cost on average between £10,000 and £12,000, are easily retro-fitted to older properties, can even be put into reverse to act as air conditioners if a heatwave strikes and Hafod has installed 140 of them in the last year.

“We are seeing the greatest growth in the sector in air-source heating systems while gas and oil heating fades out of the picture.

“Air-source has the advantage of being straightforward to fit, even to older properties, and versatile which makes it perfect for rural homes, apartments and properties where solar isn’t the best option and it now makes up 70 percent of our business.

“Despite that colleges still don’t include it on their heating engineer apprenticeships which means we can’t take on 16-year-olds and offer them day-release courses.

“There are courses for the installation of renewable systems like air and ground source and solar but these are only add-ons which we are only able to access for people who have been with us for some years.

“We really need the school leavers of 2021 being trained up on these systems this coming academic year if the Government is serious about hitting those ambitious targets.”

David Jones founded Hafod Renewables 11 years ago with his late father, Richard, and in the last 12 months they have built 200 new heating systems, up from 140 the previous year.

Hafod’s new zero-carbon headquarters near Tremeirchion is entirely powered by renewable energy, with solar panels and air-source systems along with electrical-charging points for vehicles – they plan to switch their vans to electric when that becomes practical.

Domestic systems currently make up the bulk of Hafod’s work but their track record includes renewable energy systems for over 100 farms, a builders’ merchant, holiday cottages, a bakery, an ice-cream business and a heritage railway.